Scamdemic Upate: “No End In Sight”

There is “no end in sight” when it comes to this massive hoax scamdemic perpetuated on the whole of humanity. As people fail to see the major bodies stacking up from this horrible and deadly cold, the ruling class is doubling down on the shots they are desperate for us all to take.

Russia’s ruling class has decided to extend their COVID-19 measures until 2024 because there’s “no end in sight.” According to Kremlin spokesman Dmitry Peskov, who also noted that the measures could be canceled early if the epidemiological situation changes significantly. Meaning, if enough of the slave class obeys and takes the shots, they will remove the commands previously in place.

“At first, we thought the pandemic would end in six months to a year, but now we see that we were wrong in our calculations,” Peskov told reporters on Wednesday according to a report by RT. “We are about to reach two years into the pandemic, and so far, there is no end in sight.”

They have already told us when they plan to end this hoax:

Ruling Class: The Scamdemic Won’t End Until The WHOLE WORLD Is Vaccinated

The goal is to track as many human beings as if they were livestock making the vaccine passports mandatory to even buy food.

Last week, Deputy Prime Minister Tatyana Golikova revealed that Russia would soon be implementing some of the world’s toughest Covid-19 restrictions. From February 1, 2022, those living in Russia will need a QR code to enter stores, cultural venues, and cafes. QR codes are generated when someone is vaccinated against Covid-19 or when someone recovers from the virus. -RT

The new rules were made with the intention of encouraging Russians to get immunized. While vaccination levels remain low, the rate of those who wish to get jabbed has surged in recent weeks. Fear sells, and it works every single time on virtually all human beings. Eventually, recovery won’t be enough to earn a passport from the master to live your life.  Just look at what’s happening in the United Kingdom right now:

They will continue to move the goalposts and there is no intention to liberate people. We have got to do that ourselves and it all starts in our minds. The illusion of freedom is crumbling, and the double down will begin. Nothing can be done as long as people worship those wearing the boots on their necks. 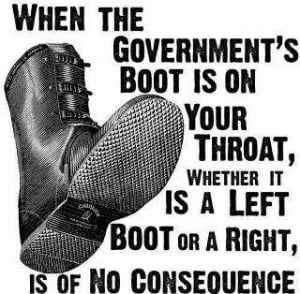 “The illusion of freedom will continue as long as it’s profitable to continue the illusion. At the point where the illusion becomes too expensive to maintain, they will just take down the scenery, they will pull back the curtains, they will move the tables and chairs out of the way and you will see the brick wall at the back of the theater.” -Frank Zappa

The post Scamdemic Upate: “No End In Sight” first appeared on SHTF Plan – When It Hits The Fan, Don’t Say We Didn’t Warn You.

2022 Will Be a Year of Extreme Tyranny: Perception or Reality?

Medical martial law: Military taking over hospitals in FOUR states after thousands of nurses were fired for having natural immunity and refusing spike protein injections

The End is Near! Stand Firm!

The Very People Who Could Save Humanity Will Be The Targeted Classes. They Will Be Treated As The Enemy Of The People, When In Fact They Are The Defenders Of Freedom And The Enemy Of Tyranny.

TOTALITARIAN MADNESS IS NOW UPON US—PREPARE FOR EXTREME TYRANNY, THE LIKES OF WHICH HAVE NEVER BEEN SEEN BEFORE

2022 Will Be a Year of Extreme Tyranny: Perception or Reality?

Medical martial law: Military taking over hospitals in FOUR states after thousands of nurses were fired for having natural immunity and refusing spike protein injections